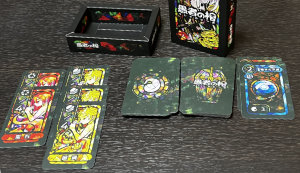 There are 25 ghost cards (five per type) and thirteen types of items for a total of 30 item cards. Each item corresponds to one of the five ghosts. For example, a sword is covered by the weapons ghost. Finally there are six reference cards, one for each player, listing the tricks each ghost does.

The winner is the first player to get ten points. The starting player begins with two item cards, while the others begin with one. Each turn has three phases:

After phase three and checking victory conditions, the current player chooses a card from their hand and passes it to the next player, whose turn then begins.

“Enquiry” as phase three requires some explanation behind the word. The action is literally “うかがい” (ask/enquire), and it’s explained as 伺いを立てる, which is to ask a superior for permission. Rather than looting or otherwise forcibly stealing from the tomb, you’re instead politely asking the ghosts for permission to receive an item. 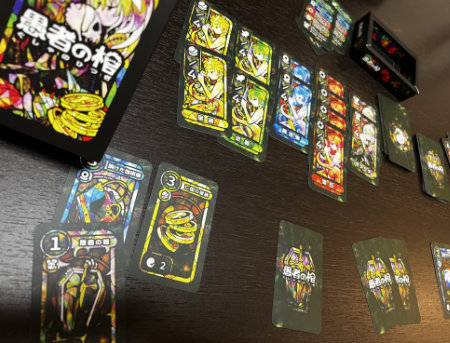 Phase 1: The player draws one item card to make a hand of three item cards. Phase 2: They then choose an item to attempt to acquire and plays it face up. Each item has a limited number times it may be asked for, and it is inverse of the point value. For example, a 4 point card can be tried for once, but a 1 point card can be tried for three or four times. Successfully acquiring a card gives the acquirer that many points.

Phase 3: Each attempt to ask a ghost for permission entails drawing a ghost card from the deck. If it is the same type as the item, the item is successfully acquired. If not, the ghost is placed in a row with other ghosts of its type. When the fourth ghost of the same kind is drawn, the item is acquired, but the ghost plays a trick before being shuffled back into the ghost deck. The type of trick is determined by the type of ghost. None are particularly harsh, and can even benefit the player by skipping the next player.

I played a few times with my wife, and we both ended up on a similar strategy of trying to acquire items with the fewest ghosts on the table. Because drawing the fourth ghost matches any card, it’s both more likely that the least seen ghost will be drawn, and drawing a fourth ghost will still claim the item, albeit at the cost of a trick being played. Our first game was a bit slow as we learned the rules, but the games after that were quite smooth and we had fun playing it.

One thought on “Fool’s Coffin”