Following up on our look at Japanese TRPG magazines and then Game Mastery Magazine, we’ll next look at Role and Roll magazine. The issue I have at hand is volume 140 published in June 2016. Weighing in at 138 pages and A4 in size, there’s quite a bit of content for 1,200 Yen (~$12 USD). The majority of the content is black and white, but a few ads are in full color.

Role and Roll is published by Arclight and has been in print since 2003. It covers a variety of games, and while primarily focused on TRPGs, it also has some board game coverage as well. If you’re interested in what the very first issue was like, they have fourteen pages of it available here.

The cover image is related to this issue’s special feature on Eclipse Phase. The top white text reads “Support for Table Talk RPGs”. The partially obscured subtitle is their tagline “for unplugged gamers”.

The feature article is highlighted on the right as “Eclipse Phase from Scratch.” The left hand gives a run down on issues content by category:

Working our way down from the top, the first entry is for the special feature on Eclipse Phase (“Eclipse Phase from Scratch”).
The category titles beneath that are in English, so we’ll just skim through their contents. Most of the articles list their authors and artists in the table of contents, which is a nice touch.

The table of contents actually mirrors the cover listing, so we’ll skip most of the sections except for the final section, “Other”:

Beneath that is a list of advertisements divided by advertiser: ArcLight and Kadokawa.

One of the reasons I originally bought this issue was because of the special on Eclipse Phase. The first two pages start with an overview of the game setting and transhumanism, then moves onto a system overview. The precent-based system is compared to Call of Cthulhu and it’s described as very simple. They make a point that the 400 page full color rulebook is mostly setting, not rules. Moving on from the brief paragraph and list summary of the mechanics, they spend nearly half a page discussing the play style of “Terror and Intrigue.”

The next two pages is based on the problem of SF RPGs being hard to create scenarios for. It includes a basic map of the solar system and then describes four patterns of scenarios and how they might play out in Eclipse Phase. They round this section out with a list of previous support articles Role & Roll has published, diving the list between replay, scenario, and other support.

The Eclipse Phase sections is finished by an eight page manga giving a brief overview of the world, characters, and a scenario that is an entertaining read. I particularly liked the Hitchhiker’s Guide to the Galaxy reference beneath the title, where it reads, “Bring a towel on a space adventure.” 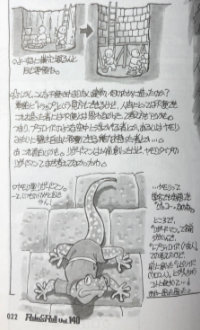 Lots of scenarios and a few replays

TRPG support and scenarios makes up around eighty pages of the magazine. A mix of scenarios and game support, the diversity in styles and types is refreshing.

The support article for the game Gun Dog provides details for running prehistoric beasts such as mammoths and saber tooth tigers.

Similarly, the article for Kamigakari is a list of new items. Primarily weapons and armor, I found it funny that the consumable items included “eating out” and a “taxi”.

On the other hand, the article about Heian-era game Nuekagami focus on new players and GMs, giving helpful advice for both. With a strong emphasis on the GM, it touches upon how to create scenarios and manage characters and timing. This may seem like commonly tread ground, but Nuekagami has a very particular take on the TRPG formula.

The game novel is a Tunnels and Trolls solo adventure and follows a similar format to the one in Game Mastery.

Truth in Fantasy looks interesting and finally sheds some light on the series of books I’ve seen at various shops. It’s essentially a series of handbooks about various topics that find their way into fantasy, such as Greek gods and prophets. The wikipedia page is in Japanese, but it shows eighty-eight books in the series.

Describes the various highlights of the issue. The text on the far left reads, “Strong support for Table Talk RPGs.”

Game magazines can be useful for language learners because they tend to have shorter content with more explanations than the main rulebooks. Being able to read short pieces helps give a sense of completion and also allows you to delve into some topics that they don’t teach in Japanese class, such as transhumanism and fighting off a horde of saber tooth tigers.