Last time we took a general look at analog game magazines in Japan, but this time we’ll dig into Game Mastery Magazine. Game Mastery Magazine is published by Group SNE and focuses on their various games. Published in March, volume 3 focuses on the history of Sword World and takes a peak at what is coming this summer with version 2.5. In addition to its Sword World coverage, it’s packed with articles about various TRPGs and board games. A4 in size, it is 162 pages and sells for 1,800 yen (roughly $18). Printed mostly in black and white, there are several full color sections. It’s available at local game shops as well as Amazon Japan

The front cover illustration represents the focus on Magitech in Sword World 2.5, with what appears to be a Magitech factory in the background. The large blue text reads, “10 Years of Sword World 2.0, and on to 2.5.” Beneath that, a list of some of its highlights:

It also came with cards for several games, which is what the blue circle advertises. The cards are for the games: “Black Stories”, “We didn’t test play this at all”, “Demon Walker”, and “Mon-Colle”.

There’s a lot of content, so I won’t list them all. The light gray box lists the articles about Sword World (SW) 2.0 and 2.5. These include a teaser and progress report for SW 2.5; an interview with the designers about SW; a book guide; a replay; some scenarios; and an intro to SW LARPing (Live Action Roleplaying). This makes up roughly a third of the magazine, so we’ll look at this in more detail after a quick tour. Under the gray box, the rest of table of contents is broken into three sections: “TRPG”, “Board and Card Games”, and “Columns / Comics / Planning / Other.”

Articles in this section include a replay and support for “Blind Mythos”. The Dark Souls TRPG also get a support article, while Ghost Hunter gets a scenario. There’s a guide to building general fantasy scenarios, a look at the new “Goblin Slayer” TRPG, and also a look back at a TRPG that Group SNE published back in 1993.

One thing that surprised me was an article about SW LARPing and an upcoming product related to it. While I’ve heard of Cthulhu LARP in Japan, LARPing in general isn’t very common despite cosplay being popular. This article introduces LARPing and has some tips for how to create one’s custom.

Bringing back some nostalgia for Choose your own Adventure, Lone Wolf, and Intergalactic spy, this issue includes a Sword World solo adventure.

A variety of board games get articles introducing them here. Some, like the new “Fantastic Flight” Sword World themed board game gets 19 pages, while most others get one to four pages discussing them. The discussed games are:
– Fantastic Flight
– Mon-Colle ES
– Agricola
– Shadow Slayers
– Demon Walker (expansion rules)
– Hell Village
– We didn’t test play this at all
– CV Pocket
– Exit
– Black Stories

This last section, as its name suggests, is a potpourri of content. A comic introducing board games, an interview with the illustrator of “Monster Collection”, contest info, ask an illustrator, and some fiction. One article that surprised me in particular was the ongoing serialization of “The Kobold Guide to Game Design”.

And for good measure some ads:

The back cover has an overview of the contents and included cards. Fewer articles are listed, but each one gets a short description.

“Support” is used liberally in game magazines, but what exactly does it encompass? It generally covers tips on how to run the game, write scenarios, and similar things. Replays and scenarios themselves, while sometimes categorized as “support”, generally fall into their own categories. For example, “Blind Mythos RPG Replay” and “Blind Mythos RPG Support” are two separate articles. Dark Souls is listed as a “Play Support”, which covers tips for the DM to create their own scenarios.

One of the main topics is the 30 year anniversary of Sword World and a look at its history. I found the roundtable between Hitoshi Yasuda (CEO of Group SNE), Miyuki Kiyomatsu (game designer, translator, longest member of Group SNE), and Kei Kitazawa (SW2.0 lead) especially interesting.

The first Sword World was written in 1988 and was ready for release, but was pushed back to the following year to allow for the publisher to expand the genre. Kitazawa, who joined Group SNE in 1994, was in high school at the time and waited in anticipation for its release. Whenever he went to the bookstore, though, he’d find that the release date had changed.

Kiyomatsu mentions he ran the game’s charts through simulation software, but at the time there was nothing off the shelf, so it was self-made. Interestingly he also mentions that he was doing mostly translation at the time, such as for T&T and AD&D, and wanted to be doing more than just that.

Their goal was to make Japan’s best TRPG game. Given Japan’s population size compared to the US, they couldn’t hope for sales as large, but they wanted the same type of market position.

The beginning of the nineties saw replays in Dragon Magazine, but it took awhile for standalone books to be published. First edition had lots of small-format paperbacks (文庫本), with about 10 scenario books being published. Short stories were quite popular, with around 20 being published. They think that is one major difference between the 90s and 21st century– there was more TRPG fiction than scenarios and replays.

At the time, reading material sold three times more than source books, so they focused on that. Part of that was probably because only the GM would buy a scenario, but many players would buy fiction. Focusing on small-format paperbacks was an intentional decision to provide cheaper and easier to buy products. My friend also mentioned this– growing up, kids could afford Sword World, but D&D was really expensive. In contrast, only three large format books for Sword World 1.0 were published. The only rules supplement were rules for playing in the Record of Lodoss War setting.

Kitazawa wasn’t really involved with Sword World 1.0. Having joined in 1994, he was focused on other projects like Mon-Colle and also wrote novels. He and a few others had been pining to revamp Sword World, which was beginning to be seen as an old game. Development of Sword World 2.0 was originally scheduled for release in 2009, but was later moved to 2008, which led to compressed development. Much of the summer of 2007 was spent staying overnight testing the game.

They decided to reexamine everything from the ground up, even going so far as to considering from using 2d6 or switching from charts to bonuses. In then end, they kept the foundation, but streamlined the rules and changed to a new world. Interested in Greek mythology, the idea of humans being able to become gods appealed to him when creating the pantheon. Above all, they preserved the world building story of magical swords having created the world.

After much agonizing, the name of the new world became Raxia (ラクシア). One revelation was it the name was chosen for its similarities to Rasatsu (羅刹, Rakshasa), a man eating demon in Hinduism and Buddhism. This seemed to embody the concept of man vs monster that is present in the Sword World games.

The core rulebook and first two supplements were released in small-size paperback. A solo-scenario was also released, which is one of their best selling supplements.

Unlike first edition, supplements containing new rules and data, such as items, were released. Worried about whether a book of items would sell, they decided to add alchemy skills to the book to help flesh it out. They also focused on replays over fiction to promote the new edition. Replays are an interesting part of Japanese TRPG culture that I’ll write about in more detail in the future, but they’re essentially game logs that include player commentary.

Sword World 2.5 will be released Summer 2018. It’s more of a minor upgrade and additional world rather than wholesale rewrite, so they went with 2.5 instead of 3.0. It was twenty years between SW1 and SW2.0, while only ten between 2.0 and 2.5, so a full rewrite felt premature.

One of the reasons they decided to add a new continent was to expand the game world without taking the mystery out of Raxia. The main continent had been so developed that there was little that was left unknown. The new game is similar to 16th century Europe exploring the world and venturing to new continents. Relations between countries are also more complex.

Following the interview, there is a Sword World 2.0 book guide. This covers the various titles published over the ten years of Sword World 2.0. There are some occasional side bars with notes from the authors about certain works.

The progress report for SW 2.5 is just one page and doesn’t give away too much, but there’s some interesting tidbits in it. The new edition will follow the same format of the previous edition and be released in three main rulebooks. 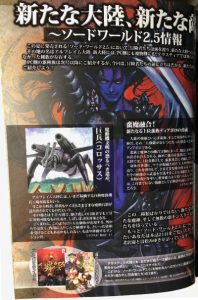 It’s set on a different continent called Alfheim (アルフレイム). Compared to the old continent of Terasstia (テラスティア）, the remains of Magitech culture still maintain a strong influence. While the new continent will be a major focus, SW 2.5 is built so that players can explore either continent with rebalanced rules. It’ll be the same basic time period, with just a few years difference at most.

A new continent brings new change, and that extends to the beasts of the land. They decided to change up the ecology of magical beasts. Some known creatures are present, while the lack of others will be a surprise. They also rebalanced stats to make battles easier. The full color teaser page mentions extremely large Magitech machines and otherworldly gods merged with Magitech.

Battle ending spells are more abundant than before. And they’re trying to avoid increasing the number of attacks that high level characters get to help speed up combat. Another area of focus has been to make the core rules easier to understand.

When asked about example rules differences for the new continent, one example was renown. Reputation points change from being a ever growing number to being used to purchase renown. This means even if your character has a high reputation, that reputation doesn’t have much reach.

The pantheon is another place that has changed a bit. The gods are largely different and create a different atmosphere. New races are also an addition to the new continent. Whether these will all appear in the first rulebook or be spread out between them is still up for debate.

The designers are also trying to make all skills and abilities useful. One example is reworking bards, which are traditionally hard to play bard in SW 2.0. Even a dedicated bard will be a viable build. The goal is to allow players to choose what they like without hobbling their character mechanically.

We’ll be taking a look at Role & Roll magazine next!