A new TRPG Kousai-no-Revulture (光砕のリヴァルチャー) was just published and immediately caught my eye. Created by the same group as Silver Sword Stellar Knights (銀剣のステラナイツ), it’s a game of giant robots and relationships! One of the unique things about this game is that it’s a two player TRPG. Not just playable with two people, but the mechanics themselves are built around the relationship of the Chevalier (pilot of the Revulture robot) and their Fiancee (the navigator and game master).

My knowledge of the game is limited to an article in Role & Roll vol.197, the official website, and a replay, but reading those inspired me to introduce it here. One of the design goals of the game is to be playable in a short amount of time, such as one or two hours after work. Additionally, scheduling two players is easier than a large group. 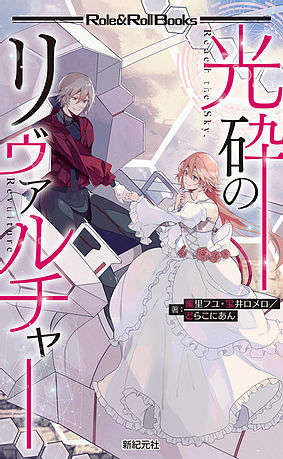 The world of Revulture is a post-apocalyptic world destroyed over 600 years ago by human-created organic war machines. Called Sky Eaters (ソラバミ) those living weapons continue to prowl the ashen skies.

The remnants of humanity have gathered into groups that live in large ark-like fortresses, scavenging from the ruins of the past world. The Chevalier and Fiancee are both genetically engineered to control the giant robots called Revulture, mankind’s sole hope against the Sky Eaters.

The terms Chevalier and Fiancee point to a potentially romantic relationship, but it is not limited to that. It can be platonic or even antagonistic; the relationship itself, whatever it may be, is central. The Fiancee from the replay has…less than friendly intentions towards the Chevalier for family history reasons, but they are nonetheless partners.

Both the world’s doom and salvation lies in Ziad particles and energy. It is what powers the Revultures, but also what caused the war that destroyed the world.

Like many Japanese TRPGs, the game uses six-sided dice. The core rulebook may add more rules, but the mechanics I read about appear focused on combat. Non-combat scenes, such as slice of life encounters, appear to focus on role-playing without using dice rolls or similar resolution mechanics.

Character creation consists of two parts: the characters and their Revulture. The characters themselves do not have numerical attributes. The Chevalier and Fiancee both choose an aptitude and story. The former describes an aspect of the character, the latter their motive or background. The Fiancee additionally decides on Emotional Circuits, which describe their feeling or memories with regards to the Chevalier.

For their Revulture, the player chooses their robot frame; weapons for it; and finally Chronicles, abilities the Chevalier and Fiancee share. Revultures have ratings for their shield; Ziad energy; movement costs; weapons; and special abilities.

The Ziad Energy rating is how much power is available to a Revulture, and refreshes each turn. At the start of the turn, a number of dice equal to the energy rating are rolled. This forms a dice pool that is used to power abilities, such as movement and attacks.

Positioning is determined by Flight Level, with 12 levels being possible. Movement occurs by changing the Flight Level of the Revulture, and has two modes: Normal and Boost. The former is slower, but takes less energy, the latter requires more energy for greater distance travelled.

The player rolls their weapon dice and count each die that is equal to or lower than the target number. Ones are a critical and count as two hits.

This brings us to an interesting mechanic: Emotional Circuit (感情回路). The Chevalier and Fiancee, both connected to the Revulture, use a shared emotion or memory to overcome hardship. This can only be done three times per session, but is exceptionally powerful. For example, reducing damage or modifying dice results.

Being living weapons that were engineered by mankind, it’s very thematic for  Sky Eater actions to be determined by a set of patterns. There are three categories of patterns: Main Doctrines, Reactions, and a Genocide Doctrine. Each of these have a condition that if met, triggers the pattern.

Main Doctrines are attack patterns that determine what an enemy does on their turn. For example, if the player flight level is between 1 and 6, a powerful lightning attack is performed. If the player is at a higher flight level, the enemy performs a different attack.

Reactions occur each time after the Revulture has made an attack check. Like Main Doctrines, Reactions have criteria that determine which reaction is performed. For example, increasing the Flight Level by a certain amount, or performing a dive if at the highest Flight Level.

Finally, the Genocide Doctrine is a special ability that happens when its criteria is met. For example, performing a deadly attack when its shields pass a threshold.

The sample scenario in Role & Roll was a solo scenario. The reader takes on the role of the Chevalier, while the role of the Fiancee is scripted. It gave a nice feel for the setting and mechanics. Combat took place in a simulator, battling against a dragon-form Sky Eater (ソラバミ).

A forty-two page PDF of the replay “ANXIOUS FOR RETURN” from the book is freely available on the support site. I enjoyed reading it, and recommend it to anyone interested in either this game or wanting to see what a replay is like. It takes the reader through a session from start to finish, including character creation. The flow of the replay is: character creation; daily life scene; briefing; mission; and debriefing. Its inclusion of Flight Level charts was helpful in visualizing the narrated movement.

The article and replay were fairly easy reads after picking up some genre specific vocabulary. A summary of the rules is available on the official site, as are designer notes. While I usually give a few excerpts of the Japanese to help give an idea of its level, I am skipping it this time due to the abundance of freely available official material.

2 thoughts on “Giant Robots and Relationships”