After trying out NoviNovi TRPG: The Horror, I next played a few games of Invictus: the King, a two player tactical card game. I originally picked this up at Tokyo Game Market 2019 because I loved the art, but it was also fun to play. Gameplay is symmetrical, with both players building their deck from the same set of cards.

What’s in the Box

The are multiple themed editions, such as Japan and Egypt, but I have the original Medieval deluxe edition. The difference between the deluxe edition and others is the inclusion of a board and wooden tokens. Contained within is a folding game board; five types of soldiers with twenty cards each; 5 king cards; 5 wooden pieces (one for each unit color); and the rulebook. The cards are very glossy and slide off each other easily.

There are twenty of each type of soldier card. The units in the Medieval edition are: Warrior, Guardian, Archer, Priest, and Wizard. Each card has an Attack value, two Stamina values, and a special ability. The first Stamina value at the top of the card (represented by shields) is when the unit has not yet attacked. The second value on the right side is used after attacking. The martial soldiers (Warrior, Guardian, and Archer) all lose one Stamina after attacking, while the Priest and Wizard do not.

There are five kings that can be chosen from. Each has a different attack value and pattern and stamina, but their special ability is the same.

Players draw two kings randomly and then select one as their leader. They then build a deck of twenty cards. Next they draw three cards from their deck and add the king they chose to form their hand. They then place one card on the battlefield; one in the queue; and finally one in their kingdom, leaving one card in their hand to begin the game with.

Players alternate turns, each with three phases. The first is drawing a card; the second is placing a card or attacking; and finally sending a card to their Kingdom if they have six cards in their hand. Importantly, placing a card and attacking cannot be done on the same turn.

Each player has an identical half of the board that the other player cannot enter. The two center rows are the front lines, the rows after that are the back lines, and the final row is a reinforcement queue. Cards may be played directly from the hand to the battle field rows if there are no cards in the queue. If there are queued cards, the card must be added to the end of the queue or the first card in the queue deployed to the battlefield (front or back line). Cards in the back row automatically move to the frontline if there is no card in front of them.

Cards may be deployed to an empty space or replace an existing card. Depending on the source of the replacement, the replaced card either goes into the hand or to the end of the queue.

While only one card may be placed, any number of cards may attack; however, each card may only attack once per turn. Attacks on the same turn combine their damage, and damage is reset at the end of the turn.

Each card has a diagram that shows which squares they may attack, and is relative to the card’s position. The Warrior may only attack the square in front of them, while the Priest may attack diagonally. When a unit attacks, it is turned on its side and its post-attack Stamina is used until the start of the player’s next turn.

If a card hasn’t taken damage yet this turn and takes damage exactly equal to its Stamina, it is captured and sent to the attacker’s country.

Adding an extra layer, each unit has a special ability. To activate it, the unit is played from the hand to the queue. Abilities are powerful, but limit subsequent placement options by going into the queue. For example, the Guardian is able to nullify an attack, while the Archer can apply one damage to an enemy card.

There are four ways that victory may be achieved:

The second method is interesting because the point values are relative and calculated per card type. If a player has two green guardian cards, while their opponent only has one in their kingdom, the player has one point. This value changes as cards are added to and removed from the kingdom. 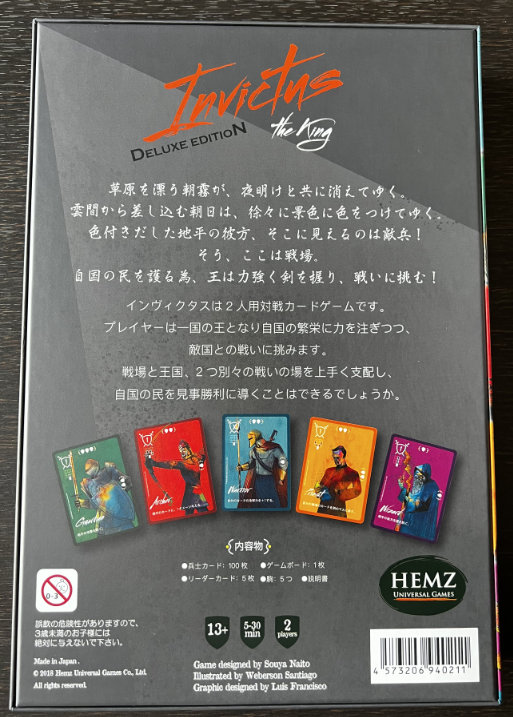 The rules took a few games to get used to, but they’re logical and provide a lot of depth. The language of the rulebook is easy to read, but the placement of a few rules led to some confusion. For example, I forgot that backline units must move to the front if there’s no card in front of them. There is an explanation in the section about setting up the board, but not the card placement or battle sections. Similarly, the conditions for sending cards to your kingdom left some questions about timing. However, both of these issues are addressed in the online FAQ. The rulebook and additional references are available on the maker’s website.