The game is for 1-4 players and takes at least 30 minutes to play each phase. There are always four characters being played, so how many each player controls scales inversely with the number of players. Its gameplay is straight forward and simple, following the original TV show story. Like many story-based games, I’m not sure about the replay value. That being said, it can be fun if you go in with the right mindset.

The box is quite hefty, filled with lots of cards and cardboard counters. There is no board, and layout out the story cards can take up a fair amount of space on the table.

The rulebook is designed to be read as the players play the game. The first phase is essentially a tutorial without combat. The second phase increases difficulty for standard gameplay and introduces combat. I haven’t played the subsequent phases, but assume they continue to increase in difficulty.

The rules are clearly written without difficult words, and there are a number of examples plus a flow chart for each type of game play. A minor complaint is is that a couple of rules are split between Federation and Zeon sections, which makes referencing mid-game a bit harder than it should have been.

Gameplay is broken into Normal and Combat, with both following the same general rules. Each is divided into rounds, with each player character having one turn. At the beginning of each round, characters regenerate their action points (AP). There is a limited number of rounds before the game ends, which are tracked by the White Base counter.

Characters can move, explore, train, use an item, use an ability, or level up. Each of these requires AP to be spent, and the cost of an action varies by character. Frau Bow, for example, has a move AP of 1, but Amuro’s movement costs 2 AP.

The majority of the game consists of normal gameplay. This entails characters performing Exploration actions to reveal new story panels until they reach the ending panel and accomplish its objectives. If completed, they progress to the next phase. If they fail, they restart the current phase.

Each story panel contains a small image and story text setting the scene. The rest of the card details the mechanical aspects of the card. These are often Exploration checks, but some cards have additional rules, such as dealing damage when characters are present at the beginning of the round.

The game is always played with four characters divided up between the players. If playing solo, you’d run all four, playing with four people, you’d each have a single character. The first panel of each phase specifies which characters can be chosen from, with there sometimes being more than four options.

The left side of the card indicates action costs. The top tracks HP, the middle character level, and the bottom action points. The amount of AP a character gains each turn is displayed to the right of the AP meter. Each character has one or more skill specializations, which improve as they gain levels. Their last level provides a special mechanic, which sometimes varies between phases.

When a battle starts, mechanical cards are assigned to characters to the story panel. In one case, a previous decision determined if the cards were randomly distributed or players could choose.

Once drawn, the mechanical card is laid on top of the character board and replace the character action AP costs. Many, but not all, vehicles give bonuses to HP. The actions, weapons, and evasion options for the vehicle are listed. For example, the Guntank was relatively slow (more AP required to move), but does more damage and had better range than the vehicles.

The starting story panel lists the available characters, starting turns, and any other pertinent rules. The ending panel contains both victory and failure results, each written a different direction on the card.

Characters can be trained within a phase by spending AP. Doing so increases their level, potentially providing new bonuses or abilities. Each phase also has a different board per character with some differences.

Combat takes place on multiple story panels that combine to form a map. Each space is numbered, which is used to determine both initial placement and movement of enemy units. 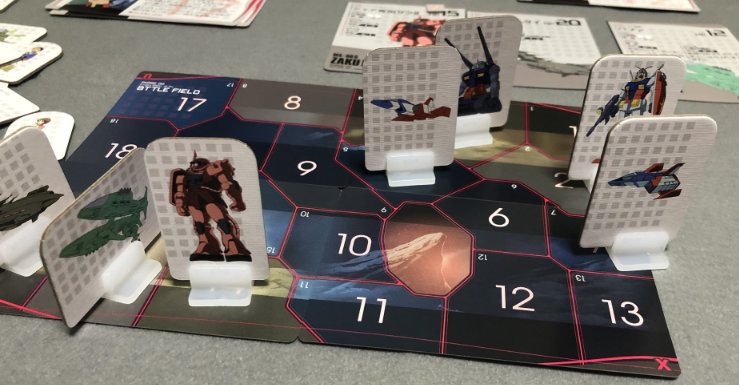 Gameplay mostly follows the normal rules, but actions are different. More importantly, once all players have taken their turn, the enemy units have a turn before the next round starts. Being a cooperative game, enemy actions are handled through event cards, which are dealt for each enemy unit. These usually just specify movement, if any, and what type of attack for the enemy unit to make, but some are special events that affect both player and enemy units.

The tutorial first phase was very easy, which made us underestimate the difficulty. Moving onto the second phase, the difficulty ramped up and we eventually ran out of turns on the last panel. We were pretty tired, though, and misread two story panels and failed to place two story panels, which caused later confusion. Replaying the same scenario again another day was much smoother and we were careful to fully read each story panel and successfully got to the final battle.

To set the mood, we played with the original Gundam TV show playing in the background. The pace of the first phase surprisingly matched the TV show and at times a story panel matched the scene on TV.

The number of rounds was tight, and evening knowing what to do it was down to the last minute. Some strategy is required to determine the order of actions and who should do what, but it felt kinda like an on rails shooter video game at times. The dice mechanic brought a fair amount of luck to the table, but characters having different specialities helped provide some control over the randomness.

Combat came down to a narrow victory on the final round with Frau Bow , who in a twist of fate was piloting the Gundam unit, being knocked out of combat. She had taken some damage during the normal mode and could heal others, but not herself.

A lot of the fun came from imitating the characters and saying their famous lines. Being able to choose from multiple characters was interesting, but not sure about replay. Subsequent missions may increase choices and incentivize replay, though.

In terms of language, the rules are clearly written and easy to read. There are are a lot of story panels, each with a fair amount of text, both story and game mechanics, none of which has furigana. The vocabulary used isn’t especially difficult, but it naturally uses some military and sci-fi lingo, and I occasionally had to look up the reading of a character, but could usually guess the meaning based on kanji.

Move the cube on each character sheet’s AP to the right from its current position an amount equal to that character’s AP recovery amount.

A missile from the Zeon battleship Musai scores a direct hit on Side 7! Atmosphere leaks from a crack opened in the colony’s outer wall!

All characters in this area suffer one damage.

Here’s an official game play video if you’re interested in watching how it plays: