I wrote about Japanese TRPG magazines a few years ago, with deeper looks at Role & Roll and Game Mastering Magazine. At the time I didn’t have a copy of Warlock magazine, but I picked up volume five and wanted to introduce it here. 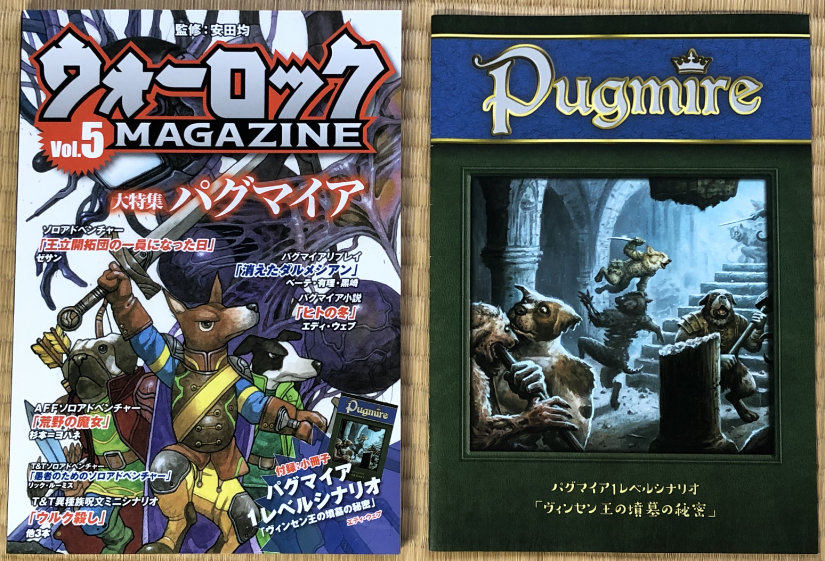 Group SNE publishes Warlock magazine, which primarily focuses on Advanced Fighting Fantasy and Tunnels and Trolls. I don’t play either game, but picked up this issue because of its special on Pugmire. Looking at some of the reviews on Amazon, I’m not alone in this. On the opposite side of the spectrum, a couple of reviews from long time fans were critical of its inclusion, instead hoping for more content on AFF and T&T. The inclusion of Pugmire is part of Group SNE’s release of the Japanese translation of the game. Looking at the cover of the subsequent issues, it looks like Pugmire continues to be a topic, but to what degree, I’m not sure. With that said, let’s take a look at the contents!

Weighing in at 160 pages plus an additional 15 page supplement, you get a lot for for 1,800 Yen (roughly 18 USD). The magazine is divided into four sections:

We’ll dive into each section to see what it contains after a brief detour to the introduction.

First, there is a change in editors, with John Sugimoto stepping down. It also explains the contents of the issue and why they chose to focus on Pugmire. The four things they list as desired when learning  a new system were interesting: rulebook, scenario, solo adventure, and replay. Of these, the latter two drew my attention as they’re not very common outside of Japan. Both serve the purpose of familiarizing oneself with rules and theme, but for many people outside of Japan, that is done through actual play podcasts and videos. There are some Japanese actual play videos, but not nearly as many as compared to English sources. Finally, for good measure, the author mentions that it’s possible for cat-lovers like himself to enjoy Pugmire.

This section has an introduction, designer interview, The Disappeared Dalmatian replay, a solo adventure, and short story.

The interview from Gencon 2019 is with Eddy Webb, the creator of Pugmire. It covers questions ranging from the inspiration for Pugmire to why he decided to base it off of D&D 5e.

The replay is from a four player game, with the stats for the characters provided. As usual for replays, the the text contains both role-play and out of character discussions, such as dice rolls and their results.

The solo adventure is eleven pages long. As a kid I loved Choose Your Own Adventure and Be an Interplanetary Spy books, with a little dabbling in Lone Wolf, but have little experience with solo TRPG scenarios. The way it is laid out here is each section is numbered and describes the situation, including mechanics. It then lists which section to continue to, sometimes with a choice or condition involved. For example, one section deals with initiative being rolled. After explaining how to roll it, the reader rolls initiative and compares the results to the three choices: if 12 or under, go to page 58; if 13, go to page 52; if 14 or over, go to page 44.

This starts off with a manga introduction to AFF, then follows up with an excerpt from an upcoming book; a solo adventure; replay; an introduction to untranslated FF books; how to enjoy “The Trolltooth Wars”, and rounded out with latest info on the game.

The excerpt is for a the Heroes Companion being released in winter, exploring one of the new magical styles.

A solo adventure follows the excerpt in a style similar to the Pugmire one. While similarly organized, the difference in game can be seen in the options it provides. Right off the bat, there are five choices to be made, and another early choice of which provisions to purchase. There are also wandering monsters table. 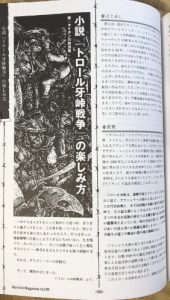 The theme of the Untranslated FF section is Vampires, and it introduces several Fighting Fantasy books that have not yet been translated to Japanese.

How to enjoy the “The Trolltooth Wars” novel is an article doing exactly that. It gives background on events leading up to the novel, gives character summaries, and overviews of battles.

Starting with a book of traps, a solo adventure, several mini scenarios, information corner, and research room articles fill out the T&T section.

The book of traps includes a manga, followed by prose and diagrams describing various nefarious traps and how they can be employed. This coincides with the release of a traps book also advertised in this this issue.

The solo adventure is a translation of “Solo for the Intellectually Challenged” from 1993 by Rick Loomis. While it is naturally similar to the two other solo adventures, its formatting is slightly different, with the choices occurring within the text rather than options after it. I’m assuming this is in deference to the source material.

There are then four mini scenarios, each 3-4 pages long.

I wasn’t sure what to make of the Research Room just from the table of contents, but it is part ten of a series exploring techniques for running T&T. Heavily annotated, the topic in this issue is “Turnaround Techniques” for making combat more interesting and handling various situations, such as salvaging victory from certain defeat.

Rounding out the T&T section is a Lovecraftian scenario.

Tohko’s Fantasy Cooking is something I haven’t seen before. Taking Delicious Dungeon a step further into reality, it describes a food dish that appears in game books or fantasy literature and then recreates it in modern times with a recipe. This time it is Dwarven Stew.

Warlock’s Jar is a conversation-style discussion about currencies, specifically those covered in the magazine: Pugmire, AFF, and T&T.

The Salon is a discussion between readers and staff on various topics. This time the topic is heroines and female characters.

Coming to the end of the magazine is a potpourri of items, with some simple rules supplements for AFF, an afterwards and preview of next issue, and an ad for upcoming books. Rounding out the issue is a return to Pugmire with the story “People’s Winter”

As a special bonus, The Secret of King Vinsen’s Tomb scenario is included as a separate pamphlet. Intended for level one characters, this appears to a translation of the English scenario.