Today we’ll take a look at a Role & Roll TRPG catalog from 2020. A catalog? From last year? While it may sound dull on the surface, I find it interesting how a publisher classifies and presents their games.

Role & Roll is one of the major TRPG publishers in Japan, and is part of ArcLight, a major analog game company that runs Game Market. In addition to the magazine of the same name, Role & Roll publishes a variety of TRPG related books. The Role & Roll game shop in Akihabara is their physical storefront.

What is a TRPG? 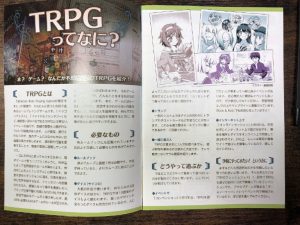 The catalog begins with the “What is a TRPG,” approaching it from the perspective of someone familiar with computer RPGs, giving Dragon Quest and Final Fantasy as examples. It explains the difference and highlights that there are lots of genres besides fantasy.

Next it touches upon things needed to play (rulebook, dice, playing cards, and people) and where to play (events or online).

One of the more interesting things in the catalog is the flowchart for choosing a system. The first division is between light or heavy games, and it proceeds from there to 13 possible outcomes. The resulting games range from Shinobigami to Pathfinder and Golden Sky Stories.

One path in particular was interesting:
“Do you like fantasy?” No
“How about SF?” My battlefield is always real
leading to the Gundog, a “gun action” military TRPG.

The other path of liking SF asks if it’s ok to mix magic, with the result distinguishing between Shadowrun and Eclipse Phase. Interestingly, all of the foreign games (Shadowrun, Pathfinder, Eclipse Phase) are under the heavy games path. A few heavy Japanese games are included, but the “light” games are all Japanese in origin.

Of the games listed, Shinobigami receives the largest treatment, with a full two page spread. The first page gives an overview of the themes and settings. The second page focuses on ninja abilities and the velocity system, showcasing the velocity system chart and a manga panel.

The rest of the entries are divided by maker: Adventure Planning Service, Incog, F.E.A.R, New Game Plus, Foreign Games, and other products.

The majority of games receive a half page entry that includes the cover, system summary, and blurb. At the bottom of each entry, there are suggestions for other games that you may like. For example, if you liked Golden Sky Stories, then you might like conversing with animals in Utakaze.

Each game system is classified with six tags:

Of the listed games, Golden Sky Stories was the only Heartwarming game (ほのぼの) and Shinobigami was the only competitive game listed.

Tucked away after the last listing is a blurb about “Playing isn’t the only way to enjoy TRPGs,” with a brief introduction to replays. Finally the back cover includes a list of Role & Roll’s TRPG related books, including those that didn’t receive a dedicated entry.